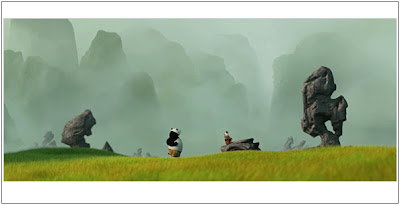 Congratulations to Dan Wagner and the whole animation team (and of course the rest of production)! Easily the best Dreamworks movie, very entertaining story, beautiful animation (the turtle character was awesome)!

The beginning is very frantic, so I was worried that this is setting the tone for the whole movie (maybe in order to keep the kids awake?), but it settled down into a great mix of quiet and busy scenes. No in-your-face pop-culture jokes, fart or poop jokes,beautiful look, good voice work, no songs, just sticking with the story. Well done Dreamworks, what a delivery!

Nitpicky (SPOILER ALERT - highlight to read): I wish the villain retained more of the initial fearful presence, his attitude was a bit too light and comedic as the movie progressed, taking away from the scary edge. And Shifu should have died in Po's arms, as you were initially led to believe, that would have made it very powerful and make the movie stand out from the goodie-goodie animation crowd. And one weird thing: I've never seen the underbelly of a rhino, but they have nipples? Those guards and their nipples, that was weird to me. :)

I hope this movie sets a tone for all the upcoming Dreamworks movies. It might just be me and maybe I'm too nitpicky, but animated features without songs, fart/poop jokes, pop-culture jokes and product placements are just so much more enjoyable. They don't take you out of the world the movie is trying to create. Kung Fu Panda was definitely a nice departure from that. Go see it!
- pic source