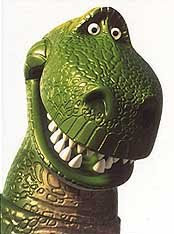 I was very lucky to go to a Friends & Family screening of Pixar's "Wall-E", but unfortunately the sound failed after about 40mins, so the screening ended there. Obviously it's useless to judge the movie because of that, but I can tell you that I saw Rex in Wall-E's home (look for it when he gets home for the first time)! :)

A few inside jokes include an R2-D2 sound (obviously, given Ben Burtt's involvement) and a Mac computer start-up sound, the Luxo lamp (parent?) and an ipod! :)
But since the movie isn't officially out yet, I will not reveal anything in more detail.

Pixar got a company store now and it's awesome!! I love company gear (at least half of my clothes consists of ILM stuff...). :)

I'll post more if and when I get to see the rest of the movie.

Hey man
Couldn't find this pixar company store you were talkin' about..

Really? It's on the right side as you walk in, next to the Arcade games. Maybe it was just closed.