Here it is: the UNOFFICIAL Tangled Animator’s Commentary made by the biggest group of animators you will probably ever hear in one room. Here’s the plan: queue up your copy of Tangled to frame 1 of the actual film (before the castle logo) and hit pause. When we count down 3-2-1-PLAY, you un-pause and hear us talk through the film. Like I said, it’s was an experiment and we may not always talk about what’s on screen, but it’s a great opportunity for you to hear many of the voices behind the film.


Head over to animationpodcast.com for more details!
No comments:

Surveillance Camera Man 2 from ... on Vimeo.

Surveillance Camera Man 3 from ... on Vimeo. 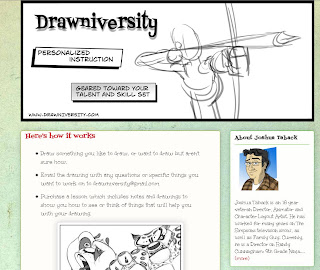 This so made me think of Norman!! 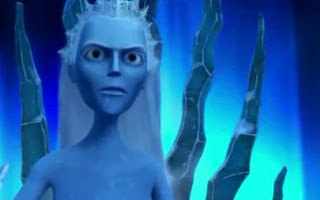 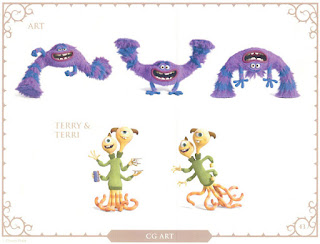 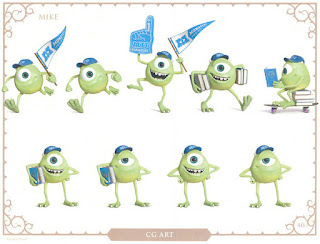 Found at firstshowing.net
and go there for a few more sheets!
No comments: 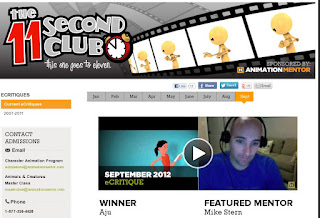 The current winner Aju did a fantastic job and if you want to hear feedback regarding the shot, watch Mike Stern's eCritique.
No comments:

Draw all of the Guardians!

Head over to Mike Stern's blog Sternio for multiple clips of how to draw characters like North, Tooth, Sandman, etc.
No comments: 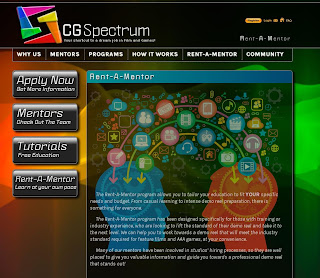 Not sure about the current selection of online animation training options? Add CG Spectrum to your list! They have an interesting à la carte approach and they offer scholarships! Head over here for more info!
6 comments:

Animated walks and runs from Felix Sputnik on Vimeo.

Email ThisBlogThis!Share to TwitterShare to FacebookShare to Pinterest
Labels: Fall 12

The Green Ruby Pumpkin - and making-of

Nicely done! Awesome to see the making-of! Thanks Tran for the tip!


The Green Ruby Pumpkin from miguel ortega on Vimeo.

The Making of The Green Ruby Pumpkin from miguel ortega on Vimeo.
No comments:

Disney The Ballad of Nessie

found via @Azizk
No comments:


Kon-Tiki Making of from Important Looking Pirates on Vimeo.

and the trailer here:

TV spot for Rise of the Guardians

Some really nice work in there!! 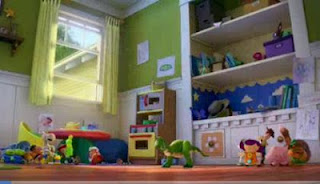 Hahaha, the Godzilla part cracked me up! 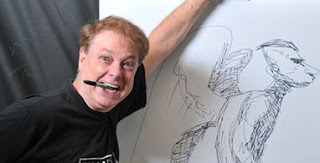 First off, a big thank you goes to Cassie Brewer for sending me a review copy of "Adventures of Plymptoons"!

Every animator knows Bill Plympton, even if it's just a peripheral knowledge of his work. But I have to admit that I wasn't that familiar with his life and his journey to becoming one of the most famous independent animators. So watching this DVD was something I was looking forward to.

For a quick overview, here are the official details: 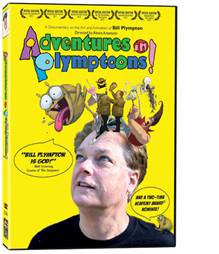 ADVENTURES IN PLYMPTOONS! goes deep inside the method and madness of America’s most independent animator, creatively incubated in his hometown of Portland, Oregon.  Interviews with many of Plympton’s collaborators, such as Tom Kenny (voice of SpongeBob SquarePants), David Silverman (Director THE SIMPSONS MOVIE), Terry Gilliam (Writer, MONTY PYTHON AND THE HOLY GRAIL), Martha Plimpton (THE GOOD WIFE), Matthew Modine (FULL METAL JACKET), Ed Begley, Jr., Peter Jason, Moby and Weird Al Yankovic, offer candid and comic insights into the irreverent man who has become an international success by not selling out.

Adventures in Plymptoons! A documentary on Bill Plympton trailer from Alexia Anastasio on Vimeo.

And here my thoughts on the DVD:

The DVD comes in a standard case with no booklet inside (which could just be the review copy and not what you get when you order it), but it's a fun cover and the backside has all the necessary information on it. 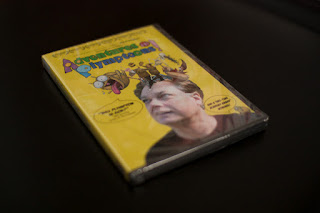 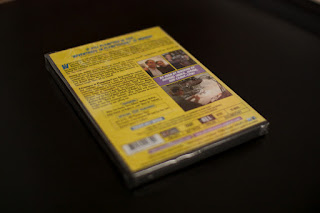 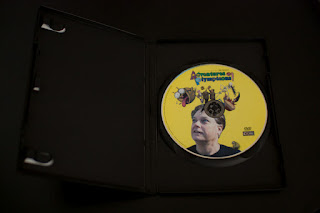 Once you start watching the disc you're being greeted with the familiar warning screen regarding illegal distribution, which then leads into a selection of trailers:

- No subtitles necessary: Laszlo Vilmos
- trailer montage for The Films of Jean Jacques Beineix
- Mary Pickford: The Muse of the Movies

The good thing is you can skip all of it and go straight to the animated menu which is presented in widescreen with "The Face" music looped over it. The main menu has the following options:

Also from Cinema Libre Studio:
- here you can watch the trailers in case you skipped them at the beginning

If you use the right arrow on your DVD remote, you get a hidden item in form of a pencil, after Cheatin':

- the video quality is average, but I did learn something new. The pencil test refers to the method of measuring breast sizes with pencils. The person demonstrating the test has her generous breasts fully exposed, so this would warrant a NSFW viewing.

The main documentary clocks in at 1h25m10s and is presented in widescreen with 2CH Dolby Digital sound, but unfortunately there are no subtitles available, which is a glaring omission. The live-action footage quality is average, with the animated content looking a tad better. Picture quality improved when I was watching it on m PC due to the smaller screen, but just as a test I also watched it on an OPPO Blu-ray player (BDP-83) through a Panasonic projector (PT-AE3000U), and as expected, I wouldn't recommend it, but let's not forget that it is not a Blu-ray. The picture quality did not diminish my viewing experience, as I was more interested in the content as opposed to the presentation.

The content is presented by interviewing directors, actors, childhood friends, his sister, brother, Ron Jeremy (with a profession accurate interview setting...), ex girlfriend, film critics, animators, etc. etc. The variety of people makes for an interesting range of topics, from childhood stories of how he grew up, to school andarmy experiences, his first jobs, the Oscar nomination, first feature and so on.
I thought it was very cool to see the singer of "The Face", which was actually a woman (Maureen McElheron) who played the piano as well.
There are title cards between topics and once you get to "How to take criticism", you're introduced to W. P. Murton, who looks like a fake critic, with a weird beard, talking how animation should be like Disney and who drinks wine at the end. I have a strong suspicion that it was Plympton dressed up. :)
Btw. his "Acid Rain" for MTV is awesome. I was hoping to see the inclusion of more of his shorts, like "The Face", if not during the documentary, then at least in the Extras section, but unfortunately that's not the case. The DVD is not a collection of his shorts, it's purely about Bill Plymptoon.


Bill Plympton Day (17m41s)
- explains who's behind the creation of that day and the efforts of making the first full length documentary on Bill Plympton
- presented on stage, in Q&A form (without the Qs) and ends up being a bit dry

Make Toons that sell (2m08s)
- it's a pitch of his book; flips through it for sneak peak, which is nice

Cheatin' (2m41s)
- talking about "Cheatin'", content and how long it's been in production

The Toonist (5m02s)
- funny live action short with Winsor McKay (it will make sense when you watch it), Bill Plympton and Gus Van Sant about The Flying House

All in all the documentary was entertaining and for people who are not that familiar with Bill Plympton a good insight into his journey as an independent animator. The extras are fun but it would have been great to include more of his work.
No comments:

Head over to Kickstarter for more information!

Things You'd Better Not Mix Up by Joost Lieuwma

Hahahaha!! The bear trap and trash one cracked me up!!! And all the others.... hahahaha, so good!
Thanks Seppe for the tip!


Things You'd Better Not Mix Up from Jiek Weishut on Vimeo.
No comments:

I thought this was super cool and will try it at home very soon. Head over here for more info!


bhGhost Tutorial from Brian Horgan on Vimeo.
No comments:

I wanted to assemble some useful links for people who want to start doing stop-motion. I have no idea, so if you have any helpful links or ideas, please post them in the comments section. Thanks!

The only random ones I have so far are:

Professor Layton and the Miracle Mask - Character and set gallery 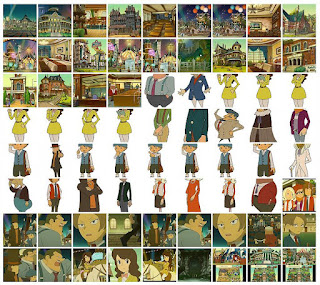 Head over here for a nice collection of character and set images from Professor Layton.
No comments:


JoeBowers Interview from Frame By Frame on Vimeo.
No comments: 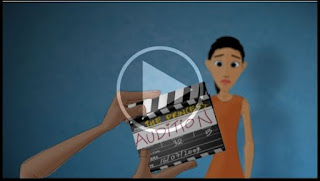 I like this one a lot. I love how the pauses between the audio are being used! Watch the winning entry here.
No comments:

At first I thought, kinda cute, but love where it went with it.

Destiny from Bellecour 3D on Vimeo.

A lot of great details!
No comments:

Puss in Boots: Test 001 from Jamaal Bradley on Vimeo.
No comments:

I'm not a big fan of that spiraling camera at the 1:24 mark. A little bit of imperfection in the camera movement would go a long way. Smooth camera pet peeve of mine...

I sense a side by side with Rise of the Planet of the Apes post coming...

THE REVIEW BOARD OCT. 26th

One More Beer! from pedro conti on Vimeo.

The Making of Hotel Transylvania 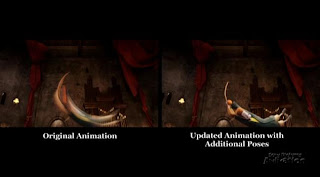 Head over here to watch the clip!
No comments:

Much more intrigued now (the posters didn't do it for me). There's some Avatar vibe going on. :) Beautiful renders though. And I like the ape like movement and hand poses throughout. 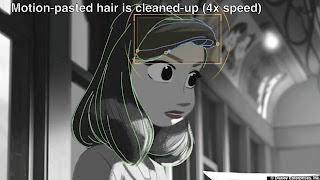