Yeah, once again, not gonna happen. I'm telling you, the moment I wanted to do the 11 Second Club competition every month for practice purposes was the beginning of having absolutely no time whatsoever. Granted, the same month I also had a baby so the timing was probably not well chosen.

Anyway, this month my parents where here so I only had today to work on it (excuses, excuses), but the weather is so nice outside, why should I be inside animating, trying to cram something into 9 hours until the deadline hits, if I can be outside enjoying Summer with my family? So once again, nothing is going to happen this month. BUT NEXT MONTH!!

But I still wanted to post my layout and ideas, since I was actually excited to do that one. I figured, given the audio, that there would be a lot of video game and arcade stuff (granted, my very first idea was at a fair, with the "claw" arcade grabbing a dead rat amongst all the old toys). So I settled on two rats in a laboratory, specifically, in a maze:


To explain what's going on here:

- first shot reveals the geography of the set, so that the audience understands where we are. This maze would be in the middle of a lab and half way through the shot a scientist would come into frame at the top and reach for the little door in front of the rats. 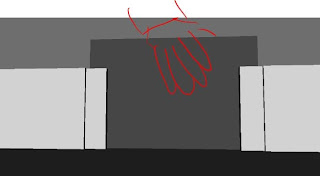 - the reach would happen across the cut and ...

- ... reveal the two rats, one a bit dumber than the other. He's the one freaking out after a head turn and seeing what has opened in front of him. He flails his arms into to other guy's face and ends up grabbing and shaking him. At the end of the shot he starts running towards the camera ... 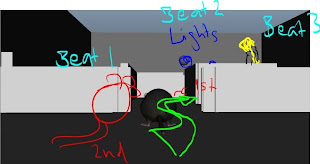 - ... which carries across the cut. The smarter rat cleans himself up and turns/walks towards the camera as he delivers the line. The dumber one disappears behind the corner and the beeps you hear are markers (lights would go on) that signal when the rat passed a certain check point. At the end the dumber rat would wave a piece of cheese above the walls as he delivers his line. 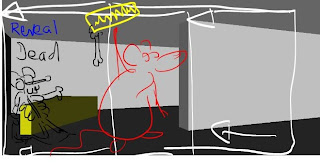 - We see him holding the piece of cheese, finishing the wave, when there's a rip and a bony arm swings into frame and the rat goes uh oh. The camera pans left and reveals a dead rat who was holding on to that piece. Upon realizing what he's seeing and holding, he gently puts the piece of cheese back done while delivering his lines/sounds.

That's it. I would have loved to do animal and acting animation combined, but hey, you gotta plan and not procrastinate. Like I said, next month, I will start my monthly exercises. 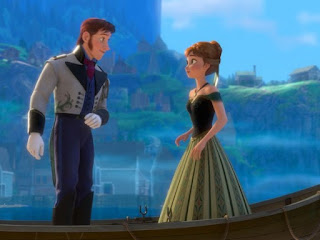 Head over to Cartoon Brew for more info and pics! Trailer is supposed to come out very soon!
No comments:

This is making the rounds and as much as I love 2D and I miss 2D movies, I have to say, I'm not a fan of the acting choices. I shouldn't talk, there's no way I could draw like that in a million years, but the acting? Holding arm, scratching neck, twirling hands when unsure, acting out words, it's just all things that are so on the nose. Might just be me.

Hahaha, nice! I liked that. See Andy Serkis, why don't you make a video like that for animation? Oh wait. You do it all, I forgot. We just paint pixels. RANT FRIDAY!!!!

Super cute, would love to see a movie like that! I could do without the boobs though. Come on, looks like a twelve year old with boobs. Typical game stuff. Get off my lawn!!

Email ThisBlogThis!Share to TwitterShare to FacebookShare to Pinterest
Labels: AM, Artist, Reel, Spring 13

animation tutorial part. 1 AKA "the secret of animation"


animation tutorial part. 1 AKA "the secret of animation" from giovanni braggio on Vimeo.
No comments:

You can almost hear the wheels turning and clicking, hahaha! Nicely done!
- found via @peetsown
2 comments: