Movies on the Radio - Music for Pixar

Not animation per se, but I love movie scores and if you do as well, I'd recommend checking out the "Movies on the Radio - Music for Pixar". It's a great collection, with cues from "Up", "Toy Story 1-3", "The Incredibles", etc.

Thanks Jonathan Korzen for the tip!

... WQXR's "Movies on the Radio," hosted by David Garland. This show featured the music of Pixar as a tribute to the life and accomplishments of Steve Jobs.

Garland presented music for such Pixar films as "Toy Story," "Up," "WALL-E," "Ratatouille," "Finding Nemo," and others, while reflecting on the ability to Pixar's music to communicate clever motifs and powerful emotions. Saturday’s program included Randy Newman’s “You’ve Got a Friend in Me” (Toy Story) and Michael Giacchino’s “Seizing the Spirit of Adventure” (Up).

Body movement in support of personality

Each animator will get to a point where they will have mastered the body mechanics enough so that they can focus on acting choices. But temptation is always there to have gestures or other body movements showcasing animation principles instead of personality. I totally understand and I'm guilty of that myself. A frequent example in my workshops is my Maya 3 assignment from the Academy, Ze Chair:

which was lovingly referred to as "Animation Jerk Off" by the awesome teacher Lisa Mullins. She immediately let me know that this is just animation for animation's sake. And she was totally right. I was more in love with the animation principles and focused on showing them off, instead of thinking about character and personality. I hope she's still teaching. Her class was the first real character animation class for me and one of the best ones.

So once you get passed that, it's less about "there's a pop on x17" but more about acting choices, which fall more into the "I prefer this over that." as opposed to being wrong (of course you can have totally inappropriate acting choices that will feel wrong, but I hope you get my point).


IP10
(This is in response to which version I prefer.)

Funny enough, I like them both, but specific parts and would mix them. I know that sounds complicated and not sure if that's helping you. What I like about "stuck02" is the amount of rotation and overlap the body has after she's being stuck. In "stuck02" she goes pretty far down up to x54, whereas in "IP10" she doesn't go as far and stops a bit abruptly. So anim wise from a body mechanics point of view, "stuck02" feels better.

But what I prefer in "IP10" is her left arm from x51 to 74, because it's stiffer. She's surprised, a bit irritated, but tense, and that is reflected in that stiffer arm. In "stuck02", from x54 to 85, the arm is loose and dangling, and feels too out of control and animated. Too me it's not in character.
After that it's up to you. Neither versions are wrong, they are just different in terms of acting choices. In "stuck02" she looks back up to x100 in a slow way, which gives her a feel of "Hello? Uhm... anybody see that? Help me!". In "IP10" she goes up very fast to x93, which gives it a feel of "Oops! I hope no one saw that!", which is a bit more in character because she looks and moves like a confident business woman, so when she's in trouble, I think she would want to keep that strong and confident look, so she wouldn't look around for help, she would try to fix it herself. That strong personality is reflected in x182, how she puts her glasses back into the right place. Then at the end when the manhole cover comes out, that's what breaks her confidence and that's why she looks surprised and out of it at x240. It's good contrast and a change in her character, whereas in "stuck02", she already looks a bit helpless like that during the x91 area. So the ending in "stuck02" is a bit more of the same in terms of character and less of a contrast. 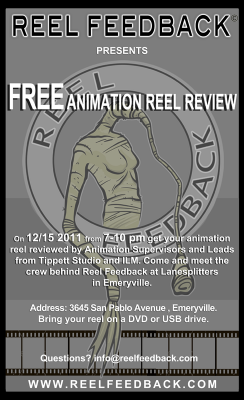 We got a cool event for animation students next month in Emeryville. We're having a free reel review where students can bring their reels and get feedback. Its on Dec 15th from 7 -10 pm. We're having it at Lanesplitters so students can have some pizza and hang out.

Here is a link to the event site:
http://www.reelfeedback.com/december11event/

Reference for jumping and stupidity

One thing I always mention in my workshops in terms of acting choices is how the environment can and should influence the acting choices of your character.

The main example, which I ripped off of "Inside the Actor's Studio" (but don't remember who said it first), is:

- imagine a scenario where a character enters a room/place and gets ready to go to sleep.
- the steps involved in doing so could be: entering room, turning lights on, putting keys or other belongings somewhere, brushing teeth, undressing, going to bed

If the character (a man for instance) is at his own place he will be familiar with his surroundings, so when he enters his house/apartment/whatever and switches on the light, he won't have to look and search for the switch, he probably won't even look in the direction of the switch while he flips it, because it's a habit. All the bathroom interaction, etc. etc. will be based on familiarity and routine.

But. If the guy is staying at a hotel (first time there), the same steps (entering, lights, keys, etc.) will have different acting choices because he is not familiar with the place. He will have to look for the switch, for other rooms, etc. etc.

So the same action will be different depending on the environment and the character's relationship to that environment.

Why do I bring this up now? I was reading an interview about John C. Reilly and his new movie "Carnage" at hollywoodreporter.com and one of the questions was "What did you learn about filmmaking from Roman?" (Roman Polanski is the director)

I found his answer very interesting and it reminded me of that Inside the Actor's Studio thing.

During rehearsals, I'd have this book in my hand, and I have to set this book down in order to do the next bit of acting, and he would say: "Why would you put the book down? You don't know that you're going to pick up the bottle yet. You're doing that because you know you need your hands free, but that doesn't make sense."

Totally true and a good reminder to question the origin of your acting choices!
1 comment:

Awesome! Too bad the anim credits are not in. The underwater stuff cracked me up! Anybody know which animators worked on this?

The Pirates! Band of Misfits Trailer

The Dragons Are Back! 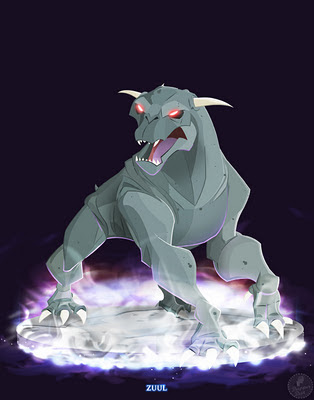 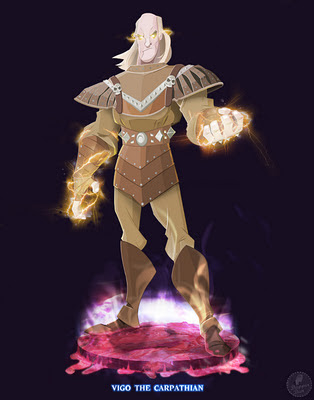 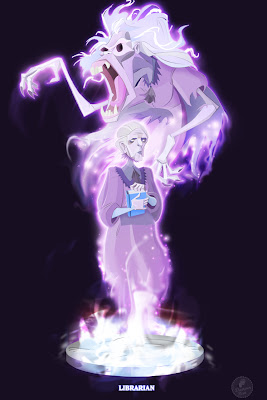 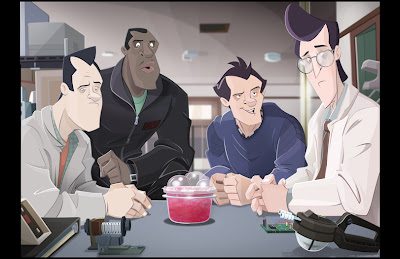 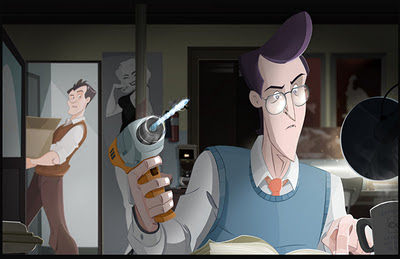 Check out Dan Schoening's gallery, love his work! Those Ghostbusters one are so cool. Would be awesome to have those as maquettes and anim rigs. :)
No comments:

This clip, besides being about this crazy awesome kid, had a section that cracked me up at 2mins 52seconds. The interviewer's facial expression and timing during his statement is just too cartoony!

"I Told My Kids I Ate All Their Halloween Candy"

Head over to Jim's site and check out his 8 page workflow dissection. Thanks for sharing!!

Emil is looking for feedback!

Kibble and Bites - by Agnes Salek

Back from the Dead by Mark Estrada

The Last Train by Animation Hub

Very nice, love it! Thanks Simon for the tip!

BEAT by Or Bar-El

Super cool! Thanks Eitan for the tip!

I love putting in finishing touches on feet and hands/fingers in my animation whenever time permits and it's a frequent topic in my workshops (will ad a clip and anim notes about that later). Lauren pointed to this great clip regarding micro movement in feet. Nice find, thanks!!

Thanks to a co-worker and through Super 8 behind-the-scenes clips I found this Epix clip with Shawn (not Shaun, hahaha!), giving the viewers and inside tour of ILM. Good stuff!