I went through a lot of my backup files in order to find an animation clip for my make-up class and ended up finding more than I expected. It's really funny to watch these clips again.
First up is the short "Alone Together" from the Pixar 3 class: 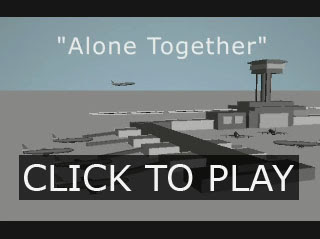 I remember taking 6 classes during my last semester at the AAU. I think they were: Maya 3, Pixar 3, Stop Motion Puppet Making, Intro to Stop Motion and two online classes (probably writing classes). I really wanted to finish the semester in Spring and crammed everything together, which meant that some projects ended up unfinished. I was more invested in the "Autumn Thieves" short I was doing in Maya 3, so "Alone Together" never went beyond the layout stage.
Next up is a pantomime shot I never finished (I sense a theme). This one was the last clip in the Pixar 2 class (which included "I do.", "Boxlift" and "His hhheeaad..."):

Here are two ideas for a waiting assignment. I really don't remember if they were made for a class or during my spare time. Either way, there you go:

Again an unfinished clip, "Tea for Two". This one was done during my spare time.

This one cracked me up. A modified Norman to look like a rat. A pre-version of the rat I'm using in the "Dual Use" clip, which is a WIP as well. Surprise!

"Stick it" is a recent attempt (last year?), which didn't go past layout (wow, not even into animation). There are so many ideas for clips that I would like to do, I guess to even have a movie is more than usual. :)

After I graduated I worked on unpaid projects, among them an AvP fan movie (see test clip here) and Dinoville. I tried contacting the makers of Dinoville but haven't heard back yet. The moment I get a go from them in terms of permission to put it online, I'll update this post.

Last but not least another recent clip. This time it's a rig test for two characters which are part of the No Continues project I'm working on. You can see more polished test clips here. This clip is more in a blocking phase, but I actually would like to polish it up because it's a fun clip to work on.

tea for two is awesome

Haha, thanks! The class responded to that one as well. Generi just has really good facial shapes.

it's so funny, i'm watching it over and over!!

Haha, great stuff JD! :D I got to say my favorite is also the Tea for two as well. You really did a LOT in your student years and they are all really inspiring. Thank you for sharing! :D

thx JD - those are such qualities :D
Can you share the jump animation you showed us at Sat class?
The one with audience's focal point. Thanks!

Masa - yeah, I'll start putting up all the stuff, regardless of their rough stage. By the end of this week I should have the grading thing up (which includes the jump and ball), plus the background stuff from the workflow one.