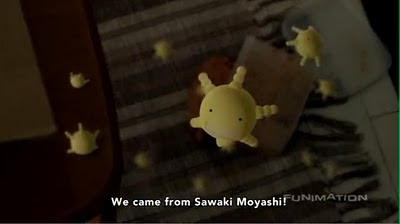 I've been strangely intrigued by Moyashimon, no idea why. Maybe because it could be a little Pikmin TV show? Those little creatures are just too cute. Wasn't too sure it the mail I got was spam, but I guess not. Here's a lengthy description of what the service and show is:

NEW YORK, NY (August 5, 2010) – Today,DramaFever.com announced that it has obtained North American online distribution rights from FUNimation® Entertainment, an American anime leader, for the hit live-action CG-animated situation comedy adaptation of the award-winning manga series “Moyashimon,” (2010), written by Masayuki Ishikawa and directed by Akira Iwamoto. The content deal launches DramaFever’s Japanese showpage.Premiering the series to American audiences in high-quality with professional English subtitles for its 70% non-Asian audience, DramaFever, the leading video website for mainstream U.S. audiences interested in direct-from-Asia entertainment, is one of only three places where Americans can view the popular Japanese series.

LINK: DramaFever has created a special showpage for the series at http://www.dramafever.com/drama/768/Moyashimon/.

DramaFever will stream a simulcast of the new Moyashimon episode on Thursday August 5 at 3PM Eastern, just hours after it hits the air on Fuji Television Network, Inc., the leading and largest Japanese broadcast television network. DramaFever will release Episode #5. The previous four episodes of the 11-episode series, which began airing weekly in July 2010, will also be available at the same time. New episodes will be added weekly around the same time every Thursday.

Adapted from Masayuki Ishikawa's comedic popular manga, Moyashimon, the situation comedy follows Tadayasu Sawaki (played by Nakamura Yuichi), a 20-something student at a Tokyo university who has an unusual superpower, which makes him able to see and talk to comical, quick-witted microbes who mock him and give running commentary as he adjusts to his university life. Moyashimon, the manga, has been publishing since 2004 by Del Ray Manga, followed by an animated version, which hit the airwaves in 2007. The series continues to grow in popularity, coming to the US for the first time in July via a partnership between FUNimation and Fuji Television Network, Inc. which allowed FUNimation to simulcast content from Fuji TV’s late-night dedicated anime programming block, NoitaminA, and gave FUNimation rights to sign the deal with DramaFever.com.

With the release of Moyashimon, DramaFever will be adding another manga-turned-live action show, entitled “Team Astro”, plus two classic “Tokusatsu” (live action superhero) series from the 1970’s, “Iron King” and “Super Robot Red Baron.” More Japanese shows will be added each week.

DramaFever’s ever-expanding library, one of the most comprehensive and current collections of legal Asian content available to US consumers, now includes nearly 140 titles and 5,100 hours of programming. This includes Korean drama and popular hit television shows, Filipino teleseyres, and Asian short films from USA, Australia, Canada, China, Japan, Singapore, South Korea, and, Taiwan. In May, DramaFever signed a deal with Hulu.com, which created a dedicated Hulu-DramaFever showpage. Future plans will bring content from DramaFever to mobile and Web TV platforms and add popular hits from China, music videos, and other forms of entertainment direct from the East.

Privately-held online video content distribution company, DramaFever.com was launched in New York in August 2009 by co-founders Suk Park and Seung Bak with the mission of making the best of Asian programming available to English-speaking American and Canadian audiences. Drawing on their experience in media, publishing and finance, DramaFever establishes licensing deals with the leading Asian networks to stream select titles in high quality with English subtitles or dubbing. DramaFever.com users can watch videos for free or pay just $4.99 per month for premium membership, which includes uninterrupted advertising-free programming, access to exclusive content and other advanced features. All subscribers can also participate in discussions, rate shows, request programs, sign up for show alerts and get the latest news on trends and developments in Asian drama, celebrities, and entertainment. As of April 2010, the company has deals to stream over 100 titles representing 5,000 hours of content, spanning all genres of media and storytelling beginning with television hit series from Korea, including suspense thrillers, historical dramas, romantic comedies and documentaries. Film, music video, reality television and other programming will be added each month, along with content from other countries. By the end of 2010, subscribers will be able to watch videos on DramaFever.com across multiple platforms. To learn more, visit www.DramaFever.com.

Phew. Anyway, anybody know about this? I'm assuming lots of particle anim or something like that? Tons of creatures, wonder how the process looks like.

Hey JD -thanks for the post. DramaFever began with love from bloggers who wanted good quality videos from Asia and they helped the NY-based company grow. There will be more cool stuff, coming from Japan and other countries, so thanks for spreading the word -- Cheers, Rosally

Sure thing! Thanks for the email!