Alright, I apologize for singling out people (then why do it?!) but I wanted to use those examples to make a point.
Can you tell me which one is the original Bishop? 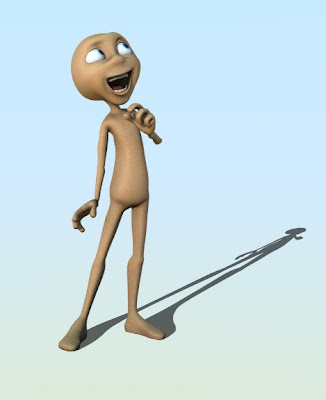 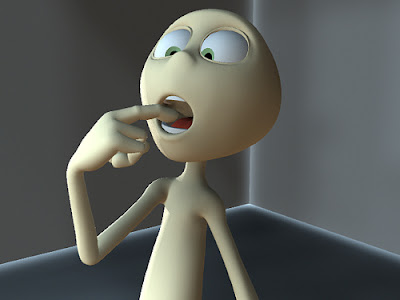 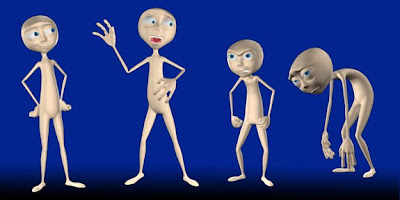 AM people can of course, but it doesn't matter how familiar you are with the rig, you can't deny how similar they all look. So why mention this? With a business like Animation Mentor I would assume that their assets are protected, so copyright issues will come up when you release a rig which looks like an AM rig. Since the creator is not charging money for it, I doubt he/she won't be in a lot of trouble besides a take-down notice, but remember, there is a fine line between innocent inspiration and rip off and I doubt that line even exists in the eye of the law.

So be professional and think about copyrights, don't copy other people's animation or ideas, etc. Besides the obvious legal implications, don't give anybody any reason to think that you are not creative. You should behave like a professional the moment you're intending to be an animator. Being a student doesn't mean that those laws don't apply to you.

This fall semester is soon over and many people are graduating and really feeling the pressure of finding a job. I always say "Do whatever it takes to get a job.", but by that I mean, be willing to set aside parties and other non-animation related activities for a while, be ready to work hard on your reel and don't be a snob when it comes to job offers (this goes especially for foreigners depending on a VISA). You'd love to work at a big company but are offered a position in a small animation shop instead? Take it. Don't be a snob. Be ready to eat a few sh*t-sandwiches before you hit the jackpot. That's what I mean with "whatever it takes". I don't mean to backstab other animators, stealing animation ideas or clips. I've seen it happen and you won't last long if you go that route. Even with the pressure that you're feeling now, don't get tempted. 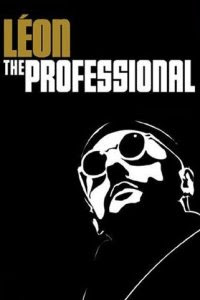 P.S.: How did I find this? I'm updating Animation Buffet with new rigs and the AM lookalike was on highend3d. Now I found another one. I don't know which one came first, but I have an idea. Either way, am I the only one who thinks this is the same model?

A lot of people mention that it's okay to modify and enhance their rigs, so this example might be harmless. I still had to laugh though when I saw it. One is a wolf, the other one a dog. Hmm... :)

P.P.S.: This rig is actually really cool, but it reminds me of a certain movie character... (if at least the tusks were different). But otherwise check it out, it's a lot of fun.

even tho obvious imitations, i'll applause them how far they worked on it like this ... :)

I am sorry Jean-Dennis, but in actual fact the ball with legs rig preceeds AM. AM effectively stole it themselves because it was freely available from a number of different people before, but AM told them to remove it from their sites when they felt that they really liked the rig and that they wanted it, and that no one else should have it unless they paid several thousand dollars.

I think it’s not wrong until people don’t clam there rig is original Bishop, he he....

But after seeing all those rigs looks like people are learning and spending time to show their skills, that they are good riggers to....

After all it shows how important is AM to learn from. (For a Rig? na, they are best teachers)

So let them do as it’s not going to replace AM Bishop, these people are only students riggers......

“Animation Mentor Rigs: Don't ruin your chances of getting a job”

I'm glad that Bobby Beck mentioned it and it should be mentioned over and over. It doesn't matter if you're a student or not or how much you learn by doing it. Don't release it to the public. It's fine if you learn from it, but keep it to yourself.
At least at a fourth finger, change the headshape a bit and alter the color, but right now it's a copy.

Andreas, that's an interesting accusation and since one of the founders is sitting right next to me I'll forward your thoughts on that matter.

This Item No Longer Exists in our Database

More quad rigs please! I need ta do a walk cycle with one of those someday....

Really good post - I'm going to make a push this year to get more rigs built for the academy.

Using a rig that looks like the AM rig is a huge mistake, as it's kinda branded to the school, in the same way that Norman is connected with the academy. It can work to your advantage, or against you (in the case of Generi, who is almost a symbol for bad animation at this point)

I know that there's an absence of generic rigs, and the AM guy has a nice appealing design, but it seems to me using a copy of a school's 'mascot' could possibly give people the impression you're affiliated with it.

I'd err on the side of caution in this case, especially since it's school rig.

That would be awesome to have a new set of rigs for the AAU!!

Btw. Ajit, Bobby Beck's post is about taking AM rigs and handing them to non AM people, it's not about copying the look of propietary rigs.

AAU has the same policy (unless it changed) about Norman (and Hogan back in the day).

Jean-Denis - Yes you are right about Bobby Beck's post, but people talked about copyright issue etc...

Well I have seen people demo reel with Norman rig & they even don't know about its copyright. They requested and friends shared with them.

Even u knows more than me there is rig called "goonRig" in Beta Release with similar design.

Your point is right having own character design and being a professional, but as said in above post they rigged it and shared they didn't steel original rigs.

People get inspired by movie character & shots; u must have seen people trying to copy animation shots…..

Its respect to Animation Mentor guy shared so much knowledge in industry & to you sharing stuffs and coming up with issues like this.

Awesome, I actually didn't know about "goon", which is an interesting hybrid between Norman and Hogan. :)

No, they didn't steal the rig, but they copied the look, and that is enough to raise flags in the legal department.

this is a new rig called rockwell,
www.highend3d.com/maya/downloads/character_rigs/Rockwell-Rig-5541.html

this is not to put the rigger/modeller in bad light... but yes the limbs of this rig do remind me of hogan... i wonder if are people spending their time on a rig then why not do something which is original or doesnt have any resemblance to the amy of the existing rigs, also showcases their talent to come up with something original.

May I just point out as the artist who was working on the first picture of Bishop I was never intending to release it after this was brought up. I made the rig purely because I couldn't afford to do animation mentor and I liked the look of it. I don't believe there is anything wrong with taking these inspirational rigs and characters and making them yourself especially if you are not intending to share them or make a profit out of them.

I mainly like the character for its no particular sex nature and flexibility in appearance, and now I am working on a new rig called Average Joe which will be a male character which can be customized to your hearts content, and this is not copied from anything.

Tara, I agree, if it's for personal use and you won't release them (especially not for profit), then there is nothing wrong with it at all. Whatever it is that helps you flex your animation muscles.

sir I am just a student and I dont know much about anything. but (and this is about Goon rig) I havnt Found any good rigs other than hogan. but hogan has so many issues especially with his arms that i personally felt that goon was an awesome upgrade. I know norman (i have seen in soooooooo many animation shorts) and bishop and the work done in them is AWESOME! and its due solely to the HARD working animator, that said I am sure most people will recognize the difference (atleast those in this field) I mean A newbie like me could instantly tell the difference I am sure the professionals will know the difference. What Me as a student is looking for is a rig which is makes my animation simpler just so that I can do more in it. I really dont worry about whether it looks similar to someother character or not, for me Learning is Important. I am sorry if I am offending anyone but this is my point of view.

Your point of view is totally valid. And there is nothing wrong with practicing, just dont' forget that once you release something to the public you have to respect certain rules. Whatever people rig and animate behind closed doors doesn't matter, that's all safe.

Hey JTD, long time no talk. I wanted to ask a quick question. Is the ball rig copyrighted by AM? Weren't there ball rigs before theirs? I thought there were. I completely agree with you though, if you're going to spend time rigging something, make it original(design wise).

I don't know. I doubt the idea of a ball with two legs is copyrighted, but the specific look probably is.

i totally agree, and it will just rune ur reel.