Cloverball - and the importance of having fun

After a brief start in 2008 where I blocked out the first 5 shots I have now finally finished this little sequence last week and I had a blast working on it! But there's a little story behind it.


Back when I was teaching at the AAU I had every class start with a bouncing ball assignment for the first week. It was a great way to see how people would react to it (did they feel like they were above it, were they excited, confused, etc.) and seeing the clips gave me a good idea how each person was attacking an assignment.

Would they do just the minimum (or less), would they think they mastered it yet didn't really, was there more to see than the bullet points were asking or did someone go above and beyond?

Since taking up any kind of animation school demands a lot of work and time behind each assignment and exercise, why wouldn't you try to have the most fun possible? That was always my approach, even if I didn't succeed all the time. Some teachers thought I was just an over achiever, which baffled me. I was just having tons of fun and trying to milk the assignment and push myself. But years later I realized that you have to make sure that your students focus on getting the basics done, and done really well, before they go off and take on crazy stuff.

In my first character animation class, taught by the awesome Lisa Mullins, I learned what "animation jerk off" was. It was this clip:

It was a "getting out of a chair" assignment, which was supposed to last 5 seconds max. I will never forget her reaction to that clip. After an initial compliment on how I seemed to have understood the basic principles of animation (to an extent), she proceeded to rip the clip apart and it was the best critique I've ever gotten and a huge eye opener. My clip was just about moving stuff, it was animation for animation's sake, or "animation jerk off", instead of exploring the character, acting choices and breathing life into a computer rig.

She was so right. At the same time it was also extremely rewarding to just let loose and animate the hell out of something. I still indulge in this to this day, but I try to keep the balance in favor of character instead of movement.

But every now and then, I just like to have fun. And this brings me back to the bouncing ball assignment. What I would explain to the students back then was my view on what constitutes an F, a D, a C and a B, which I've tried to illustrate in the clip below: 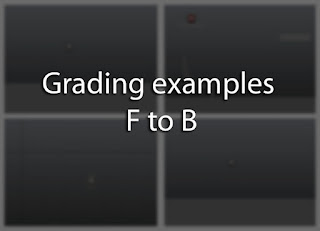 This is of course all subjective and feel free to chew me out ("What?! You think this is a F/D/C/B?!")

Unfortunately, I don't remember seeing anybody go for an all out A with the "go big or go home" attitude. Of course, it also all depended on their skill set, school schedule, etc. but still, I missed the "fun" part in most of the clips.

So what's an A in my distorted point of view? It's a clip where you can tell that someone just ran with an assignment. Of course this can lead to questions like "Do you have a problem with women?" when faced with my very first bouncing ball assignment:

... and no, I don't have a problem with women, I was just being stupid and added "bouncy" things to the assignment... and I completely understand the question... (hiding in shame...)

Anyway, as posted at the top of this entry, "Cloverball" was my idea of what a bouncing ball assignment could look like. :)
And here are the usual suspects of video formats: youtube, vimeo and quicktime.

Cloverball from Jean-Denis Haas on Vimeo.


A bit more information regarding the planning of this sequence:

The original idea of doing this over the top bouncing ball, as mentioned, came out of the AAU days and it got mixed with the additional knowledge that I gained regarding camera work (thanks to Star Trek) and after having seen Cloverfield (hence the name Cloverball).
But this was all in 2008 (at least that's what the time stamp said on the last file when I opened it), and I can't really remember all the details. I just knew that I wanted to have a fight between two balls, taking place in a city.
This is as far as I got in 2008:

It was a week-end blocking out affair and got reopened last Tuesday, for another 3 day stint. So all in all 5 days, following roughly the main idea outline. As I continued last week, I knew that the red balls should assemble another guy with two legs, and that they would then walk/run towards each other and fight Godzilla style, with the red guy pushing the blue guy into a building as an ending.
That ending felt too open though and I wanted a better ending shot. First I thought about the red guy running/jumping into the blue guy and ending with a wide shot of a big mushroom explosion/cloud shot, but eventually settled on the current last shot.
The blue guy firing lasers and the red guy jumping away plus firing up his defense shield ideas grew pretty much in a straight-ahead fashion. Since I set myself a deadline (Thursday night, so that I could present it on Friday for a talk at the AAU), I didn't sit down to thumbnail or storyboard everything out. But I was really excited about finishing this whole thing, so tons of idea just popped up and I ran with what I liked the most.

The rig that I used was from Mutiny Studios, which you can download here.

The render was a standard software render using the DOF Control script for the depth of field.

Awesome post JD. Makes me think back to some of my outlandish ideas and really bad animations. My biggest issue was trying to do these assignments with no real thought or planning of what I was making.
Can you chat a bit about how you came up with the idea and your plan for this?
As always, thanks for the awesome posts.

AWESOME job JD, now I know what's the standard of A in your class, I was waaaaay far away from it.

I love watching this clip. I watch it over and over and over. I definitely feel like I am at the B mark. Gotta take some time to hit that A!

Thanks guys! And Matt, sure thing, I'll add it at the bottom of this post.

back when I was in AM I felt pressure to be trying to make super cool awesome stuff out of every assignment. But then the critiques i would get back where always "you have to know the basics first. You're spending all your time on all this extra stuff without understanding building a solid foundation." So I toned down and tried to just nail the basic elements of the assignment perfectly.

In other words, I had D level skills but was trying to make A level scenarios, and was advised to just try and accomplish C level work.

I would recommend the same thing though, to focus on a solid foundation first, especially when you are on a D level. I can see why you would get comments like that. But I like that you had the drive to go nuts every now and then. You have to be able to let out your creativity once in a while. But once you feel comfortable on a C level, start pushing again.

@Matt I updated the post with more planning info.

I wonder how do i learn how to animate cameras like this?
Been trying to learn how to incorporate camera move into my scene, but i am always always discouraged to add them for any scene.
Any suggestions to learn about camera moves?
Bee

I'd start with learning/researching about composition and camera language in general, like "Film Directing Shot by Shot", or "In the Blink of an Eye", as well as "Framed Ink". On top of that I watch a lot of movies and try to study what the shots I really look like and how the cameras move.