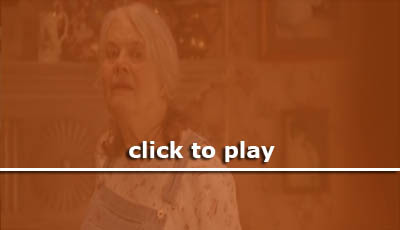 The power of a head move.

In it you have Sookie asking "Aren't you going to tell me to be careful?" and to that Adele responds "You're always careful, Sookie, about what counts and I can depend on that, ain't that right?"

What I really like about it is Adele's head move at the end. In one way she's trusting Sookie and telling her that it's all okay. But with that head move up it feels more like she's TELLING Sookie to be careful. Yes, she says "...ain't that right?" in a firmer tone which makes it less of a statement or comment and less "nice-grandma-like". But still, to me the head move and expression makes it look like she's not interested in the answer of her question. She doesn't need the answer because she's telling Sookie what the answer is. There is no room for a discussion.

Adele could have kept her head down and the voice friendly and it would never have such an impact. Even the same delivery but no head move at the end would make her less of an authority.

This might just be me but that's how I interpreted the scene and I really like it that way. :)

I love posts like these, it helps me so much whenever I watch movies because I start knowing what to watch out to study better! :)

Thanks so much JD!!