Having a day job as an animator means sitting at a desk at work for the majority of the day (and sometimes week-end), so when I get home I'm not exactly looking forward to being stuck in my home office. When I animate at home then the heavy lifting is done with my desktop computer, but all the critiques for my animation classes and workshops for instance can be done on a laptop.

I've been using many different laptops over the years and none of them have ever been quite right. It's a massive first world problem, I know. At the same time it's also fun to try out new laptops or in recent years, hoping to find the right balance of portability and productivity via touch tablets.

Enter VAIO, who graciously let me borrow one of their tablets, namely the VAIO Z Canvas: 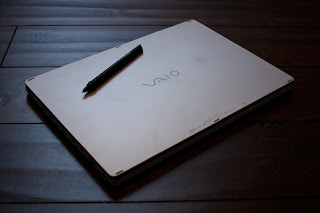 The review unit came with a keyboard cover and a pen/stylus. The keyboard cover clips on to the tablet via magnets and charges using the tablet's power. There's a button switch that lets you turn the power on and off and enable the trackpad if needed. 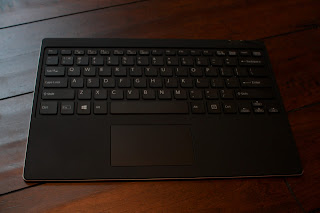 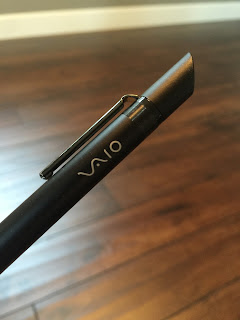 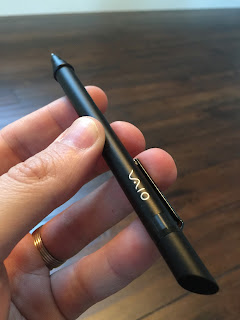 The tablet is very similar in overall size compared to my Surface Pro 4, but there are some differences, good and bad, depending on what you need, but both are very different compared to the iPad Pro, which is still miles ahead in terms of design, build, sound, performance, etc. but only if you like a closed ecosystem (software and hardware wise). Again, it all depends what you want and need. 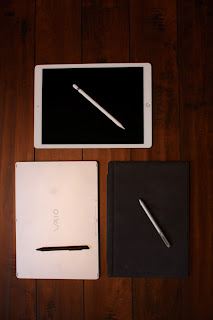 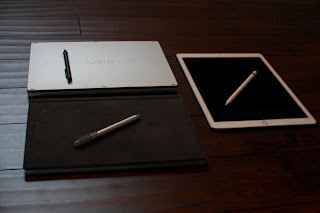 Overall the Z Canvas is a bit bulkier and heavier than the Surface Pro. 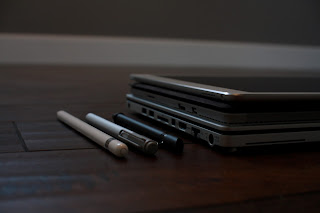 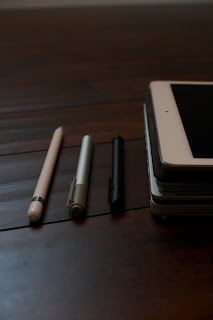 Design wise I like the pen a lot. It's not too slippery (the little ring towards the tip helps), the length works for me (the Apple Pencil is too long), the clip on feature is great (I wish the Apple Pencil had it), but I do like the magnet feature a lot on the Surface Pro pen and was missing it here (although it comes with a plastic clip on for the side of the tablet, which is better than nothing, but not as convenient as a magnetic option). All pens perform ok, it just depends on the software. Out of the box though I'm still blown away by the Apple Pencil in terms of precision and (pretty much) zero lag.

The problem is that my preferred critique program (Screencast-O-Matic, which captures your desktop and lets you draw within your capture area) does not exist on the App store, and so far no app lets you use the built-in camera while you record a critique. The best app so far is Coach's Eye. Lots of drawing options, frame by frame video analysis, just no camera capture (as in, recording myself while I watch a clip and draw on it in case you need to act something out). For that I need a PC laptop/tablet.

The Surface Pro might be thinner, but the Z Canvas offers a lot more connectivity options, which is a big plus. 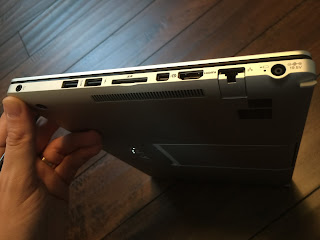 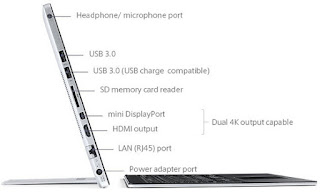 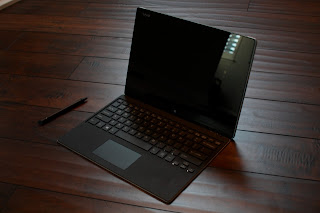 ... except for the built in stand. 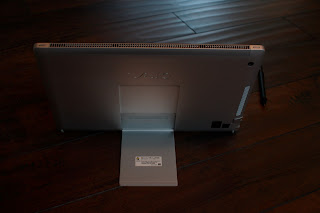 Now, this is very subjective, so whatever problems I have can be a non issue for you. Here's how it works:

It's easy to open and close with one hand if needed and obviously no problem with two hands. Although I was a bit surprised by how hard you had to push the stand in order to fold it back in. At the same time, it also stayed in the position you want it to be because of it, which is a plus.

What bumps me is the size and width of the stand itself. I write a lot of critiques sitting either on a couch or in bed, with the tablet propped up against my legs. The foldout stand of the Surface Pro is as wide as the tablet itself. The Z Canvas stand, as you can see, is really small and ends up between my legs, so it's not very useful for my on-the-go needs. I know, very subjective, but just something that doesn't work for me.

On top that, there's the keyboard, which presented me with my second big problem. It's a detachable keyboard that serves as a cover, but doesn't stay attached to the tablet when used as a keyboard. 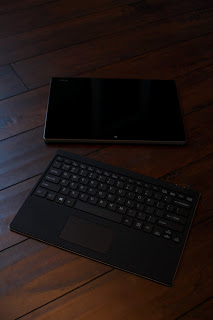 If you're looking for a hinge or anything, then you're out of luck.

But if you want to prop the tablet on a table (or whatever surface) and type in a different location, then that's an option (I haven't tested the range because it's not like I'm going to type in another room).

This can be a plus for you if you're more of a Cintiq person, but for me, it made it very difficult to type while sitting on a couch or in bed, on top of the tablet stand problem.

The usual suspects of external buttons are here for power and volume, but there's also a button for pen and keyboard input options as well as an on/off button for the touch panel, which is really neat. It allows you to keep using the pen as an input device, yet you won't get conflicting inputs because your hand isn't recognized anymore (think of it as an added palm rejection option). I do miss a screen rotation lock button though (even the iPads don't have it anymore, it's a software option as far as I can tell). Going back to power, the Z Canvas doesn't have a magnetic charging connector like the Surface Pro, but at the same time the regular charger plug doesn't pop out as easily as the magnetic connector.

When it comes to actually working with it, I was primarily looking for heat, noise and pen lag performance. You can buy different configurations, so you have options in terms of performance power, but after all those years none it matters to me the moment the laptop or tablet gets really hot and/or loud.

Heat: luckily, while recording critiques and performing other tasks, the Z Canvas got warm, but never as burning hot as my Surface Pro (to a point where I can't even have it propped against my legs anymore), which is great. The iPad Pro is still the coolest of them all (temperature wise).

Noise: because it does heat up, you will hear the fans kick in, and again, it's working better for me than the Surface Pro, because that one gets loud (and it's not a faulty unit, I tried four different Surfaces, two regular ones, two Pros, unless I'm really unlucky). Unfortunately for both, when recording my critiques, you can hear the fans kick in and it's an annoying layer of noise (even when using different mics like the built-in one, which immediately picks up fan noise, or headphone mics, which are better, so not all is lost).

Pen lag: if the software is optimized for the pen, they're all really good, although both PC pens ended up displaying more lag than the Apple Pencil (but even on an iPad it depends which app you use). The review unit did have problems keeping up with the pen movements when using Screencast-O-Matic. It wasn't a dealbreaker, but at the same time not really encouraging either for what I'm looking for. The Surface Pro 4 didn't have any problems with it.

I like to listen to music and movies while working and streaming Netflix/Amazon/HBO Go/etc. was no problem. Overall it behaves like you'd expect a Windows machine to behave. At the same time, I still prefer an iPad for mobile movie consumption and book reading due to ease of use.

There are other features that might matter to you, like color reproduction, viewing angles, performance when using Photoshop or video editing programs, etc. but that's not something I'm looking for, so I can't comment on any of it. I do use them, as well as Maya and other programs on the Surface Pro but only for quick jobs and not in a professional manner (i.e. for hours on end), so other reviews will be much more helpful to you. You can crank up the resolution though, up to 2560x1704, and if you keep the icon size at 100%, it gets all tiny really fast, so the screen real estate is nice.

Overall I'd be much better off price wise with a cheaper laptop you might argue, but the trackpads are usually not that good on cheaper models, carrying around a mouse and finding a surface for it is a pain and they don't offer the comfort of touchscreens. The ones that do offer touchscreens lack in precision and most of them don't have any (good) pen options. Unless you're willing to spend more money, but then you're in the VAIO/Surface Pro category. The Z Canvas has its list of pros and cons, but specifically for me, the keyboard and stand are dealbreakers, as well as the thickness and weight (even the Surface Pro is pushing it), and in its current configuration it's also not ideal when it comes to critiquing animation.

I realize that these factors are super specific and subjective, but that's what I'm looking for. #firstworldproblems


Head over to the VAIO site for an overview of all the features and which model configurations are available.

That is so mean yet would be so much fun to animate!

You're crunching. So now what?

Great article covering a lot of crunch aspects. Everybody crunches for different reasons. My main advice, take care of yourself, physically and mentally. Head over to Gamasutra for the post:

You're crunching. So now what?
No comments: